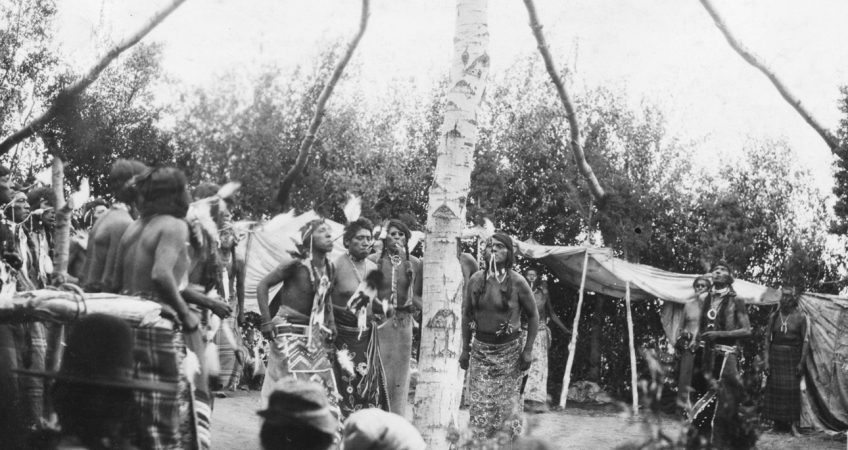 The Sun Dance is one of the most important religious ceremonies of the North American Indian nations practiced mainly by the Arapaho, Arikara, Asbinboine, Cheyenne, Crow, Gros, Ventre, Hidutsa, Sioux, Plains Cree, Plains Ojibway, Sarasi, Omaha, Ponca, Ute, Shoshone, Kiowa, and Blackfoot tribes. Each nation or tribe has distinct features differentiating each dance but they have many features in common as well. Common features include; a sacred fire, dancing, drumming, singing, fasting and in certain instances, self-torture.

The motive of this ceremony is mostly to gather and pray for health where members of the tribe make individual sacrifices for the benefit of the community.

The Dance usually goes on for four to eight days starting at sunset. According to the tribal folk it signifies the dynamic flow between life and death and the cycle of deaths and rebirths. It also celebrates spiritual renewal and rebirth of the members of the tribe and also renewal of the earth they live on.

The lodge where the dance is performed is built by the tribesmen according to the instructions given by the most famous priest who was often regarded the best lodge maker. He would give instructions to the tribesmen to build a tepee and instruct the rest of the participants to find the items needed for the construction. Eminent men of the tribe will search for a tree with a fork on top to be used as the center pole of the lodge. After the tree is selected, a qualified person is chosen to cut the tree down and the cut down tree is treated as a fallen enemy.

Then a bundle containing brush, buffalo hide and long straws is placed on the fork of the tree. Afterwards, the elder most woman of the tribe leads a group of dressed up maidens to the tree and they strip the branches off the tree.

When the sun rises the next morning, the warriors of the tribe attack the tree with guns and arrows to symbolically kill it.

The fork of the lodge (tepee) symbolizes the eagle’s nest. Eagle is one of the most sacred animals of the Plain Indians and is considered a messenger who flies high and delivers prayers to the God (Wakan-Tanka). Eagle is thought to be the communicator facilitating connection between man and the spirit, during the sun dance. The main theme of the dance is made up by the Buffalo which is the other important animal in the tribesmen’s life. This is depicted in the Sun Dance and the buffalo is incorporated in the dance in many symbolic ways. The skull of the buffalo is used as an altar and the offerings are presented to the skull during the Sun Dance. Some tribes stuff the nose and eye sockets of the buffalo skull with grass, symbolizing vegetation for the buffalo which in turn benefits the tribe. The Plain Indians believed that the buffalo provided them physical and spiritual well being and without buffalo there would be death.

The dance continues till the end of the 4th day and ends as the dancers are given beds of sage to relate their visions to priests while continuing to fast. These visions contain new songs, new dances or sometimes even future prophecies.

When all is done, all the sacred items are left in a pile and the Sun Dance Lodge is handed over to Mother Nature to do as she wills. The dancers, priests and all the tribesmen leave with a refreshed feeling of balance and renewal.The bond between the tribesmen and the nature is once again reassured.